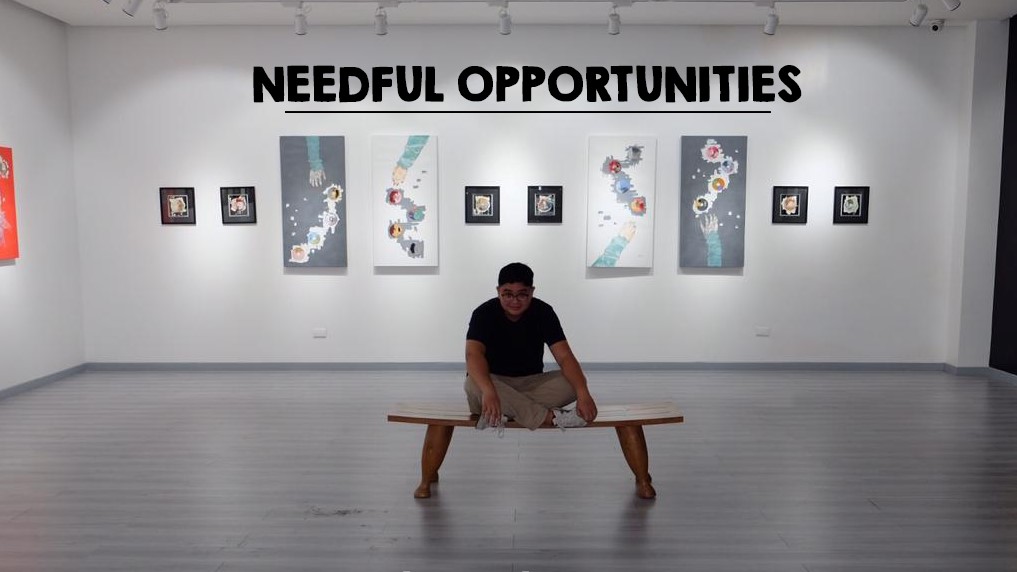 ScenePH interviews artist Panch Alvarez on his art and moving back to his hometown.

If this were a video, I would open with a blooper reel and the line “Oo, mas marami na nagpapadrawing sa’kin na hubad! Kung kailan pa may girlfriend ako tsaka pa nangyari yan diba?!” Just like that. Without context or background on who this person is or what he does. But I’m almost 100% sure it’ll make you laugh. This is Panch Alvarez as I know him – always ready to crack a joke. Regardless of the topic, he’ll find a way to insert some humor into it. Which is only fitting for someone who used to make “witty Filipino shirts” for a living.

The last time I saw Panch was in Altro Mondo Creative Space, an art gallery along Chino Roces in Makati. It was the opening night of his solo show “Needful Opportunities,” one of four that he had done over the course of two years. This was on February 15, 2020, a date that feels like a lifetime ago for most of us.

At the gallery, I remember asking him “Paano mo dinala lahat ‘to dito?” referring to the works hanging on the walls. Laughing, he tells me: “Madali lang! Nilagay ko sa car tapos nagdrive ako pa-Manila.” As if driving in a small car full of canvases is something he does every day, although I doubt it was the first time he had traveled from his hometown in Naga to the Metro in this way.

Panch moved back to his hometown of Naga in 2018, when he decided to dedicate himself completely to his art career, leaving behind four years of college, five years of government work, and a couple more running his own business. “I left the t-shirt business to do traditional painting.”

It was at this point in our conversation that he brought out the hubad line, a sudden response to my question about how different his art was now that he was working on it full time and at home. The quickness of the response led me to think he had been waiting all day to use it.

“Malaki yung difference,” he says, quickly sobering up after a few seconds of laughter. “Medyo may konting regret kasi if I started this siguro a long time ago, style-wise, malayo siguro yung narating ko in terms of how I wanted to paint.”

He talks about finding his voice and the difficulty in doing so. “Lalo na if you’ve been drawing doodles for a long time,” a direct reference to his former work.

“I don’t think I’ll ever stick to one thing,” he says when asked if there is anything specific he’s looking for in his explorations. “I think I would never be content with how I draw or paint. I think continuous siya na evolution.”

As I came to understand during the course of our interview, nothing is ever so simple with Panch; there was a complex thought process to each response, almost to the point of confusion and contradiction in some instances. But I suppose the same can be said for most people in the field – of art, of literature, of anything remotely creative.

While he believes that his style will continue to change and evolve in the next coming years, he is also widely aware that an artist – and, in turn, his art – needs to sell, a sobering reminder that even our creatives are still subject to the demands of the market. “Kung may nagbenta na na isang style, bakit mo pa babaguhin yun? At the same time, ginawa ko siya before and nakaipon ako para hindi na ko mag-isip na ‘o, ito bumenta ‘to, dito na ko.’”

Manila is just too busy. I didn’t have space.

“Manila is just too busy. I didn’t have space,” he says when I asked about his decision to return to his hometown of Naga in 2018, almost three years ago.

“So [now] I have so much space; I have so much time… In terms of space, time, and resources, maganda dito sa Naga. Tahimik” was a line that stuck out to me during the interview, primarily because it was again a reminder that such decisions are not made with rose-colored glasses on, altering us to the fact that many have, on more than one occasion, romanticized a life away from the city. As someone who grew up in the dirt and traffic of Manila, it was important to me on a personal level to see “returning home” as a logic-based decision. “Kumbaga, yung plan ko talaga before was to make stuff here, tapos go to Manila for exhibits,” something he achieved in just a little over a year after moving back home.

“Yung problema ko lang [dito sa Naga] is walang art scene dito,” at least not in the same degree we have it in Manila. Regardless, Panch has clocked in at least two exhibits in his hometown, one of them being in his then newly-built studio.

“I never thought about it that way, na dream siya,” he said when I alluded to the studio being a dream come true. “It was more of a necessity. If I’m going to do this seriously, I should have a space that feels serious. So, you have to create a space.” He claims that, regardless of whether he moved back to Naga or not, a studio was always something he intended to have as a full-time artist. But of course, in Manila, it was simply too expensive of a goal.

As a full-time artist, Panch dedicates even his side projects to art. Such was the case when he decided to hold art lessons, either in studio or online due to the COVID-19 pandemic. “There is no one program that I teach,” he says, preferring to structure his courses around the needs, strengths, and weaknesses of his students.

“Let’s say student number one is good with ink drawings, pero is bad with anatomy. So, I teach the student to draw ink drawings better, and then the anatomy… I usually do an intake interview to see kung talagang interesado yung bata o hindi.” He tells me of a student whose parents were interested in enrolling their child, but who he later decided was not interested in learning how to draw or paint. “So kinausap ako ng magulang na bigyan ng chance. Dalawang intake interview yung ginawa ko for that student. Ang hirap kausap. Tahimik lang siya. So, [I showed them a few photos], tapos yung napili niya abstract.” He then designed the program around abstract art, choosing to focus on the student’s emotions rather than his mind. “Sa kaniya lang. Sa iba naman hindi ako nag-aabstract.” Panch currently teaches 14 students, which may not seem all that much, but it begs taking into account that those are 14 individualised programs that he himself has designed.

He goes on to tell me of another student that was enrolled simply to accompany a friend who was interested in learning how to draw. “Two hours, Nikki. Two hours,” he tells me, a look of exasperation and amusement on his face. He had taught this student simple color combinations for two hours to no avail. “Pero siyempre hindi ka puwede magalit… After a while since ayaw ko naman na nagbabayad sakin [pero walang evolution, sinabi ko na pro-bono na lang. On the seventh session, pinagdrawing ko siya… ang ganda ng drawing niya! Natuto din naman pala ‘yung bata. Matagal lang.”

If anything, these classes have taught Panch patience. The latter portion of our conversation revolved around his students – from a five year-old that wanted to draw “Bad Ginger,” a stray cat that would go around harassing other cats to an eight year-old who believed that otter poop could defeat faceless ghosts. From his stories I deduced that the experience of teaching has opened him up to different realities, thus possibly influencing his own art in a similar way.

While talking about the COVID-19 pandemic, Panch mentions that “it denied [him] of mobility.” As an experiential artist, being able to move around and travel was something he deemed necessary. “Nawala yun sa’kin. Nawalan [rin] ako ng opportunity to find connections,” highlighting the fact that he considers his full-time art career to have been a late start. “If I were a Fine Arts student, meron ng opportunities… So [since] hindi naman ako aral, I had to work extra hard to gain my connections… I could only rely on [being able to travel to Manila] to make friends and to submit proposals to galleries.” He mentions that his one-man show in Altro Mondo was the fruit of unrelenting persistence. “Ang kulit ko magbigay ng proposals.”

It’s been quite a journey since he first moved home to Naga – from figuring out how to build a name for himself both in and out of the city, to exploring newer forms of art, to imparting his knowledge on a younger generation, and now to finding more opportunities to grow even further. “What’s next for me is that I’ve been writing applications for residencies,” which only tells us that this artist’s profile is just a draft, one that will be rewritten and revised over the course of Panch’s career. And we – viewers, critics, and enthusiasts alike – have the honor of watching a local talent find his place in Philippine art.

For inquiries on works for sale, commissions, and art classes, you may reach Panch Alvarez through his instagram @panchnotdead. 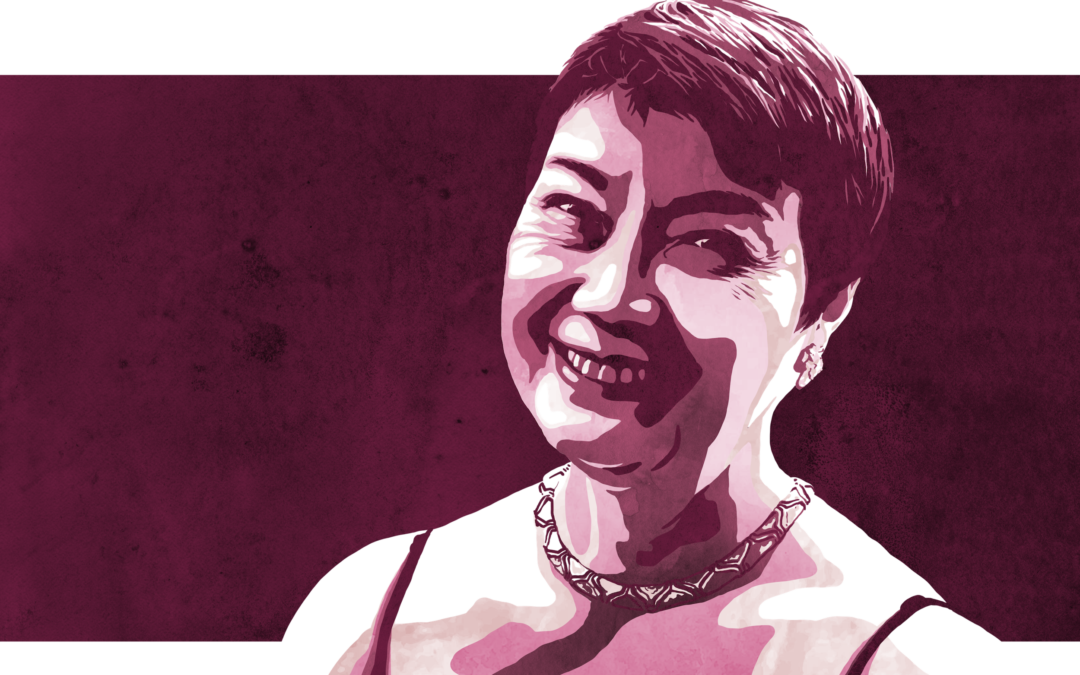 Pushing Filipiniana Jewelry a Cut Above the Rest