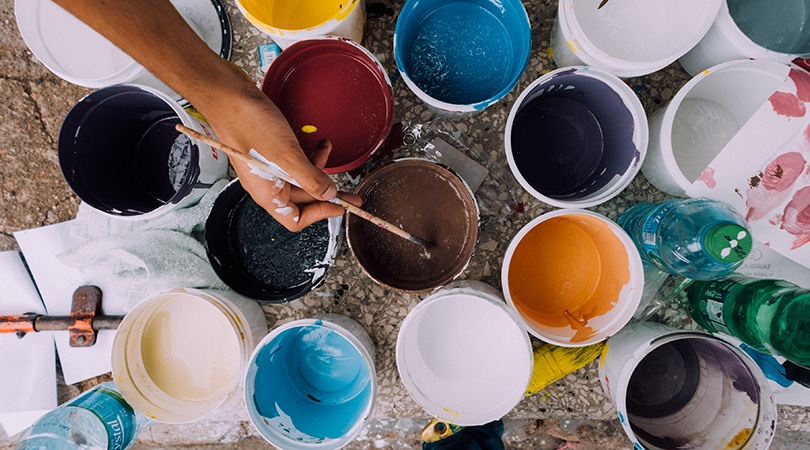 Perhaps it may be cooking up an unfamiliar recipe, revisiting an old hobby, or learning a new skill, we guess it’s safe to say that we’ve all tried to do something different to shake things up a bit. In this article, the Scene PH Team talks about the things they’ve tried to do, what worked and what didn’t *pats teammate on the back*, and the progress that they’ve made so far. Early last year, as a means to escape my mundane work-from-home cycle, I caught up on Seventeen’s variety show “Going Seventeen”, and eventually started watching different KDramas. Just like a lot of my friends, this led me into thinking of the possibility of learning the Korean language — and so I did.

The initial challenge that I encountered was my learning style. I’m the type of person that does need a teacher or an “accountability buddy”, but I decided to trust in my self-discipline. I searched for reliable online resources, and asked my friends who were studying different languages about their methods.

After work, I dedicated one to two hours to learning. It started off by studying Hangul, the Korean writing system through 90 Day Korean. I then started taking free online lessons from Talk To Me In Korean, which were extremely helpful because they had a podcast and online notes I could browse through. I also decided on purchasing the level 1 textbook and workbook from the same company so I could try out different activities. I was surprised by the amount of progress that I was able to make, and that I was motivated to study despite being exhausted after a whole day of working.

Progress report a little over a year later? Oof. This is where things get embarrassing.

When the demands of work and other projects became more and more hectic, much to my frustration, I had to slowly let go of studying Korean. From daily learning and practicing, it turned into something I’d do thrice a week, and eventually, I would be too exhausted from work to continue on. From being able to comprehend some Korean words and phrases, I had forgotten how to read Hangul altogether.

My advice for anyone who would want to learn a new language or skill is to really make the time for it, and be as dedicated as you possibly can. Sure, I can blame work or my projects, but if I hadn’t lacked self-discipline and motivation, I am sure I would’ve made a lot more progress. I also learned how critical it is to find someone to learn and practice with, because actually having conversations in the language you’re studying is so vital. I mean, what’s the point of learning Korean if you don’t actually use it to converse with someone? Also, shaving off an hour or two everyday to study may sound simple, but if you’re juggling a fulltime job and a handful of freelance projects, this may be easier said than done.

As negative as it sounds, my entry isn’t meant to discourage anyone from learning something new, but hopefully serves as a reminder that it’s totally okay if the things you tried out don’t pan out the way you want it to. There really is no shame in failing, and as I’m writing this, I realized that you can’t really call it “failing” if you’re simply trying out something new.

This is cheating (a little) because I wouldn’t consider practicing Yoga a hobby I’d picked up over quarantine. I used to be able to do Yoga regularly, especially pre-pandemic, when the yoga studio was literally just a building away from my office.

This is, however, the one thing I’ve been able to carry over from our “normal lives” into this pandemic, and it’s honestly all thanks to Alo Yoga, Yogi Approved, and Yoga with Adrienne. I wouldn’t say that I’ve made any progress in my practice and my skill set, to be honest. I still can’t for the life of me do a headstand without using a wall to support me. I also can’t do some relatively simpler poses like the Crow pose. However, it has provided that much needed sense of routine. It’s given me an hour to myself to focus on my breathing, listen to my body, and just exist.

Turns out, with a hectic work-schedule (even more so) in this pandemic, Yoga is exactly what I need. Growing up, I always loved working with my hands, whether that’s drawing, painting, sewing, or attempting to make just about anything from scratch. I was the kid that always signed up for art lessons during the summer, but it’s something I unfortunately pushed to the side as I got older, making way for work deadlines and just adulting in general.

I’ve been meaning to get back into it, always telling myself that I’d make time or that I’d look for a project to try, but the long-awaited push finally came late in the quarantine, when my best friends decided to send me a Paint by Number “Sanity Break Kit” by Imahenasyon Manila, which I would’ve finished in one sitting if I didn’t try to pace myself to space out the fun!

And to say that it was a relief to create again is an understatement. It was such a welcome break in these unpredictable times that I started other craft projects such as an embroidery kit from Burda and You — unlocking a new skill, with some trial-and-error, but which I definitely enjoy learning.

So far, it’s been a good challenge and even better for my mental health. Like a friend told me, working with your hands gives you a greater sense of control when your mind is already very noisy, and the fulfillment you get when you finish? Ah, it’s the cherry on the cake!

NIKKI: GOING EVERYWHERE AND NOWHERE AT THE SAME TIME I think it’s safe to say that everyone is feeling a bit stuck these days. More than a bit, most likely. My biggest realization during the initial lockdown here was that I had been wasting so much time dedicating myself to things that I didn’t really care about. When I found myself at home with a whopping six extra hours in my day, I started going back to the activities that I only used to dedicate weekends to. On some weeks, I wouldn’t even have weekends for them.

So, if we’re talking about trying, then I would say I “tried” it all – yoga, baking, reading, writing. I put “tried” in quotation marks because these were all activities that I had already enjoyed before. I just stopped dedicating time to them.

It wasn’t until I stumbled on my friend’s streaming channel that I was persuaded to try gaming. And the rest is history, I suppose. That’s my actual entry for this piece. The great thing about it was that I didn’t have to shell out copious amounts of money just to play. I started with games that could run on my laptop or phone, like Overcooked 2 or Among Us.

It gave me an avenue to do the one activity that I really felt like I lost because of the pandemic – travel. I even opened an Instagram account to dump all of my “travel pictures” in. But my favorite gaming adventure so far has been designing my Spanish themed island. You can check out our latest Twitch stream for a tour.

Coming up with an entry for this list was not easy.

The uncertainty of this pandemic has been taking a toll on me. I feel unmotivated, stuck, uncreative, and lazy. So to be completely honest, I’m not doing anything outside of work and Netflix, and this should be OK. Doing nothing while on quarantine is absolutely all right.

Like many, I am hard on myself whenever I waste days being unproductive. It also does not help when you see friends on Instagram working out, creating content, and thriving under lockdown.

So I hope this serves as a reminder that everyone copes differently. If we’re languishing (Read More) and if we’re not doing anything at home while the outside world is crumbling, nothing is wrong with us. It’s 100% fine to take days off to just lie down, feel our feelings, and rest. There may have been bumps along the road, but for a project that is nearly five years in the making, we think we’re doing pretty okay, wouldn’t you say?