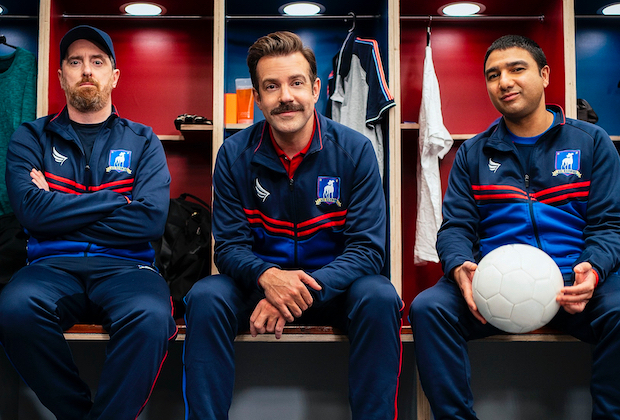 Series and movies that’ll bring out your inner sports nerd

Following up on our theme of health and wellness, the team put together a list of series and movies that brought out our individual and mutual interest in sports and athletes. Check out our recommendations below!

“Ted Lasso” is about a small-time coach who was hired to lead a professional soccer team in England despite having no experience with football. Even if I have zero interest in the sport, I absolutely adore this show! With themes of kindness and overcoming adversity, this series is what we need right now. Plus, it’s genuinely funny! Catch it on AppleTV+ now!

One of the KDramas I’m currently watching is Racket Boys. The story revolves around a middle school badminton team from the province of Haenam, South Korea.

It’s a pretty feel good and light KDrama, and I’ve been looking forward to new episodes of the show every week. I used to play badminton in grade school, but never played on a competitive level. Watching the show makes me wonder what could’ve been if I didn’t quit and took the sport more seriously.

Oh, and a fun fact (and a bit of a spoiler)-the writer of Racket Boys is Jung Bo-Hoon, the same writer of Prison Playbook. If you’re a big Prison Playbook fan like me, get ready to see a lot of its cast members make cameos on the show! “Martial Heroes” movies are full of action-packed scenes, flying kicks, sword dances, and iron palms. I particularly enjoy wuxi movies with a touch of comedy, as Stephen Chow and Jackie Chan movies provide. For this however, I recommend these sports-wuxia movies for the Kung Fu and general sports fans: Kung Fu Dunk and Shaolin Soccer. The couple are the classic over-the-top Kung Fu movies some of us crave for while showcasing it in traditional sports that leads to unexpected playmaking.

Perhaps by chance, my 90’s childhood was a time when family sports movies were the hottest thing in Hollywood. Often focused on the underdog, stories of empowerment, integrity, and learning to stand up for yourself soon become the theme of my tween years. And of course, sports became cool! Although I wasn’t very sporty myself, competitive habulan, patintero, and agawan base were the highlights of our days. Eventually, I did get into ice skating for a while, which may be why some of my favorite sports movies are on the ice.

With the Olympic fever still in the air, I’m reminded of the popular 90’s movie, “Cool Runnings,” which is based on the true-life story of the first Jamaican bobsled team—who beat all odds (including the country’s lack of snow or winter, for that matter) to join the 1988 Winter Olympics in Canada. As a kid from a tropical country, the comedy-drama felt absolutely empowering when I first watched it (and it still is), literally showing the impossible made possible. Honestly, I loved it not only for its humor and storytelling, but also for those strong winning moments that prove that sportsmanship makes you the real champion.

And since I’m on an old-school high, I have to include “The Mighty Ducks” movie trilogy in my picks. Following the story of a small-town hockey team making it to the big leagues, what makes the film even more special are the ducks themselves. The characters are all representative of different stereotypes, from the bully to the geek, and it was great to feel represented, especially as an awkward tween. And to have them join forces, maximizing each one’s strength, was the best feeling. With their signature “Flying V” strategy and “Quack” mantra, I will always be a fan! After all, “Ducks fly together!” Released in 2006, “Stick It” is pretty much the comedy-drama version of the life I watched my sister live for years. For those who don’t know, my sister used to be in the Philippine National team for gymnastics — a life she lived for years until an injury forced her to give up the sport. “Stick It” was one of the movies she and her friends would watch whenever they would have sleepovers at our place, competitions in the country and abroad, and after gymnastic meets. Without giving away too much about the movie, “Stick It” is about Haley Graham, a rebellious 17-year-old who, after walking away from the sport, has to make a comeback to right some wrongs. The movie touches on the usual themes like sportsmanship, and camaraderie. But — and what I remember made me like the movie so much — it also opens the conversation on a couple of very important and timely topics: that kindness and compassion prevail, and that there is power in saying “no.”

When I was thinking of what to highlight in this list, I realized that I could track different periods of my life through the sports I practiced or was interested in. Grade School and High School were all about cheerleading and gymnastics. College was an odd era of rugby, something I’m still interested in until now. My mid-twenties have somehow found themselves in the world of motorsport, although that’s something that’s been present in my life since before I can remember. My mom and brother are avid F1 fans, but it wasn’t until recently that I took a personal interest in the sport, even going beyond Formula 1 into Formula E, Endurance Racing, and MotoGP. Sports are fun, whether it’s practicing sport, following a favorite athlete, or simply couch potato-ing with a playlist of sports films and series.

Anyway, in the spirit of tracking periods of my life, I’ve chosen three different films that represent the three main sports I’ve immersed myself in over the years:

Honestly, I love the entire “Bring It On” franchise, as cheesy and unrealistic as they are, but “All or Nothing” and “In It to Win It” are my personal favorites. Basically, you have a typical American high school setting, all the drama that usually comes with it, and a bunch of cheerleaders performing what seem like impossible stunts. They’re not as crazy difficult as the movies make them out to be. My team tried a bunch of them in High School.

My second entry takes on a more serious note, and it is one of the sports films that I think belongs in the list of classics, along with the likes of “Million Dollar Baby” or “Rocky.”

“Invictus” is a biographical film that tells the story of how Nelson Mandela used Rugby to unite a post-apartheid South Africa. The Springboks, as the team is called, are now synonymous with both the sport and the country.

I wanted to end this article on a light note, with something that I hope is more relatable to a wider audience. And because I’m hoping that our readers have watched at least the first movie, I’m just going to drop some fun facts instead of a summary. Fair warning: Although the movie is inspired by Nascar, my fun facts will be about F1, since it’s the motorsport I’m most interest in.