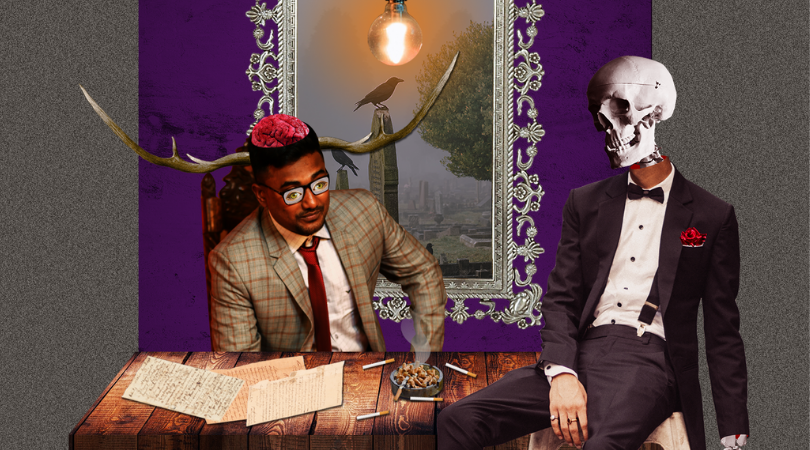 The Demons We live With

We interview horror fictionist Karl R. de Mesa about his genre and its place in Philippine literature.

I’ve lived all my life in a subdivision near the Monasterio de Sta. Clara along Katipunan Avenue, where egg vendors spend their days selling trays of cellophane-wrapped eggs for the alms givers, those who pray that their special occasions won’t get rained on.

Papa says, “If Sta. Clara was to grant every favor asked of her, we’d be in a drought forever.” My mother: “I heard the nuns take all the eggs that people leave and give them back to the vendors. They must be so sick of eating eggs!” Whatever the truth may be, the egg vendors persist and so does the practice of giving alms to prevent the rain from falling.

The Monasterio de Sta. Clara is situated below an overpass that leads directly to the university area of Katipunan Avenue, where Ateneo, Miriam, and a part of UP are located. “There’s a ghost in that underpass,” says my dad, who is quickly corrected by my mom: “Isn’t it on the overpass?”

We spend the rest of breakfast discussing the multiple accidents that have occured in that area—drivers losing control of their cars for no reason; cars running into the pillars as if the driver had been distracted by something. “I used to drive there all the time!” I exclaim. “Pero hindi naman madaling araw,” replies my mom. If she only knew.

Hearing about the number of accidents that have happened near Sta. Clara came as no surprise to me. What is shocking is that both my dad and my uncle have been witness to two separate accidents, both related to drivers losing control of the steering wheel. One of them did not make it. There is much speculation as to the origins of the kambubulag, the most popular of which is the girl in the dark alley.

From The Kambubulag by Catherine Batac Walder

Karl went on to narrate his childhood house, and how it was filled with paperbacks that had been left by an uncle. “My uncle was a big fan of [horror fiction]. And it just so happens na it reflects the kind of milieu I grew up in.” This experience is what ultimately led him to claiming the genre as his own. “While I was growing up, I opted to write horror because I gravitated towards [it]. Yung mga tropes niya were things that I resonated with… parang real sila.”

And they are real, or at least, their existence is something most Filipinos grapple with in their everyday lives. “Our myths and folklore still live with us most of the time,” says Karl.

While the Spanish and the Americans tried to use the manananggals against the babaylans and shamans, it was perhaps this same propaganda campaign that aided in the preservation of the very folklore we still live with. “So for us, because we were left with it, it became our… psychic space. And in those terms, I started writing.”

Karl R. de Mesa, as he is credited in his work, is a journalist who has published both “horror and equally strange nonfiction books,” according to his Facebook page. Some of his titles include “News of  the Shaman,” “Radiant Void,” and “Report from the Abyss.” He, along with Joseph “Joey” Frederic F. Nacino, are the editors of “Demons of the New Year: An Anthology of Horror Fiction from the Philippines,” which was published by the University of the Philippines (UP) Press in 2013.

It’s a short collection, part of a larger series of anthologies, but one which provides a varied image of the horror fiction genre in the Philippines. “Ang gusto namin [gawin dun sa anthology was to have] as wide an array of representation of the genre,” says Karl. The 11 short stories in the collection range from what Karl calls “classic horror,” like Dean Francis Alfar’s “Brother and Sister” to a kind of comedy-horror hybrid, as seen in Rommel A. Santos’ “Best Served Cold.”

It also includes Tyron Caliente’s “Dark Moving Houses,” which Karl describes as part of the New Weird, a genre that includes authors such as Jeff VanderMeer and China Miéville, both of whom are highlighted by Karl as notable authors of horror fiction. “Surreal lang siya. Pero kasama yan sa horror na it leads you into confronting [something that your mind can’t wrap itself around], so it recoils at the mere concept of it.” “I want to send someone to Hell,” Mr. Escobar said, taking a seat, “and Rey Cruz referred your services to me.”

From Best Served Cold by Rommel A. Santos

“Ano ba yung local horror fiction? I think that’s a huge umbrella term. I wouldn’t really know how to [describe it]. I only really know how to describe my own fiction. [But] for me, I guess it’s anything na hindi ikahihiya nung author na tawagin siyang horror fictionist.” This latter statement harks back to the first part of our conversation, when Karl mentioned that horror as a genre has always been looked down on; it’s not something you often see in mainstream bookshelves, although there are some exemptions. Karl cites Budjette Tan’s soon-to-be Netflix series “Trese,” which he says “is such a great way for beginners, for outsiders, to get to know our myths. Parang nakakababa ng barriers kasi popular culture yung approach niya.”

I highlight the tendency of local authors to use our own folklore in their stories, and ask whether or not he sees this as a limitation. “I don’t think so,” he says. “Our folklore is pretty deep and there are lots of versions of it. Actually, it’s limiting for the reader kasi hindi niya alam na may ganito pala, but it’s interesting kasi ang dami ng authors na [gumagamit ng non-mainstream Philippine folklore.]”

In that regard, the work of these local authors allows for an expansion of a universe that all of us—whether we believe in their existence or not—inhabit. Karl recommended The Aswang Project  as one of the best sources to learn more about the creatures that inhabit our islands. He mentioned the Bal-Bal, a creature that consumes corpses and leaves the trunk of a banana tree in the coffin so as not to alert the mourners of the body’s disappearance, as one of the more memorable stories from the collection. Many versions of this ghoul exist, depending on the region or area of the country that one finds themself in. The same can be said for most other mythical creatures.

During the interview – which could have gone on for much longer – it was clear that, amid the plethora of voices that take part in the conversation about Philippine folklore and horror fiction, there was a resounding attempt to depict a vast and expansive genre in its local form. This much can be seen in “Demons of the New Year.” From Salot by Eliza Victoria

As I write this article, I’m sitting at my desk near my window that overlooks our tree-filled garden. It’s 11:00 p.m, pitch black, aside from the small motion-sensor light that turns on every time a cat comes close to it. When I look out, I sometimes think I can see the shape of a large narra tree.

When I was younger, my Ate Judith used to tell me not to stare too hard at it or go near it. The workers that came after Typhoon Ondoy destroyed a good part of our house refused to sleep in the area Papa set-up for them, because it was directly under the narra tree. If legend is anything to go by, then these warnings and hesitations were because a kapre most likely resided in that tree.

It’s gone now, but as I blow out another puff of the obligatory cigarette I smoke when I write, I can’t help but wonder if the tobacco smell is coming from me or from something else outside.

Karl R. de Mesa has recently published a new book entitled “Calling out the Destruction: Meditations on Violence and Transcendence.” It is available for digital purchase via his Facebook page.

The anthology “Demons of the New Year: An Anthology of Horror Fiction from the Philippines” is available for purchase from the UP Press’s website as well as on their official Lazada and Shopee stores.