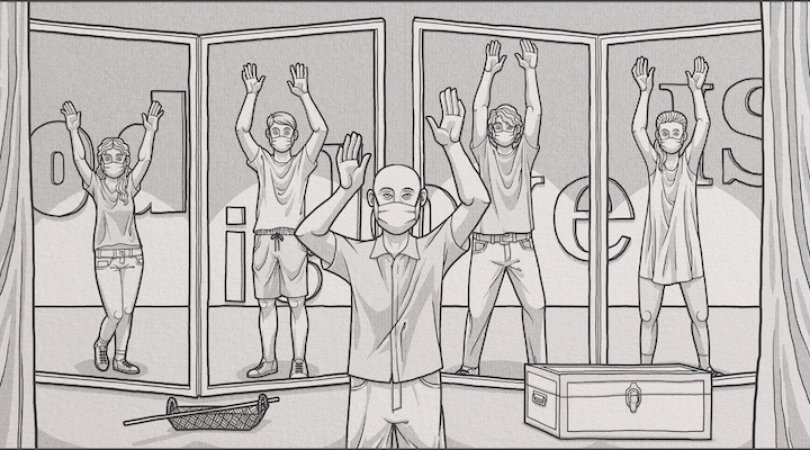 Theater in the New Normal: Is this the Real Life?

…is this just fantasy? To close this series, we discuss what theater could look like in the future – and how art remains relevant, most especially now.

In March 2020, I had tickets to “Dekada ‘70;” I was trying to secure tickets for Ateneo blueREPERTORY’s (sold-out) “Next to Normal;” and was making plans with my friends to buy a double-feature: Sandbox Collective’s “Every Brilliant Thing” and “Lungs,” which they were to run back-to-back on March 28.

I remember thinking that it was a great time for theater. With so many fantastic productions being put up, the question of what show to watch and how on earth it would fit into my schedule was almost always something I was constantly faced with.

Two weeks later, ECQ was put in place, and we haven’t been back to the theater since. As I sit and write this, I cannot imagine when and how theaters would possibly re-open – and what it would be like when the time finally comes.

For the last installment of this series, we finally touch on what theater could be like in the future, and more importantly we discuss how art remains relevant, most especially now during a global pandemic.

Abi Sulit: We have to wait.

Bibo Reyes: In more developed countries where the internet is faster, they are developing ways of audiences being there digitally. [There are] really a lot of creative ways that theater companies are adjusting… [but for me], substituting what we love with this online method will really just never approximate [the experience of going to the theater.]

Just to make it clear, the digital stuff, while it’s great – people are just thinking [of] so many great ways to use this platform – there’s a show that’s literally a video call, your exit is you turning off your video parang ganon… There [are] a lot of ways that theater is adapting, but I don’t think that’s the theater. That’s like the theater life now.

You’re inspiring all those kids there. That’s the opportunity you get when you stream

Lara: Let me jump off that – now we’re seeing the rise of these streaming platforms like Disney+ releasing Hamilton. On the one hand, this makes theater much more accessible for people who can’t afford to spend Usd 300 to watch Hamilton live. Or even just here in the Philippines. Maybe a lot of people can’t afford to watch “Ang Huling El Bimbo” in the theater, which is why it became so popular when it was streamed for free.

But, on the other hand, there is this way of thinking that theater is supposed to be immersive. It’s supposed to be experienced in the four walls of the theater. I just wanted to know what your thoughts are on that – and how you feel about streaming platforms in general?

Maronne Cruz: I’m for it! I’ve always been for it. I really think shows [and] Broadway should find a way for it to be more accessible. I mean, no matter what you do, it really does not replicate live experience. People still listen to artists on Spotify but it’s different when you go out and see them live in person – it’s a completely different experience. It’s the same thing with theater.

I don’t think na streaming will ever take away or make people lose interest [in] actually going to the theater so I think streaming is good. More companies should stream.

Bibo: Super agree with Maronne. Every single person that I’ve seen that has experienced theater through a stream for the first time has had one common takeaway and that’s “I can’t wait to actually go and watch.”

The people naman who didn’t reach that point – who saw it, maybe enjoyed it, didn’t like it, well you’re not going to get them in there anyway. So it’s really a gain for all of us. Because the more people are exposed, the more people will want to go.

Abi: Ako, I agree na we should make things more accessible. I just hope that speaking from an usher’s point-of-view, people don’t take videos if it’s not allowed! If we start streaming things online respect the company who will take nice footage, respect them to do it for you. Don’t steal and you know [say], “I’m going to do it myself!”

Lara: I’m thinking nga if this is going to be more normal na companies are going to stream it maybe [shooting a] bootleg, that [practice], will go away.

Abi: It takes a lot of work. If for example, we’re doing it for our shows here pero international show siya, it’s hard to talk to the licensing. Meron silang mga ties na you’re not allowed talaga. Kaya nga bawal to take pictures. Bawal to take videos. But if it’s our own shows for example (originals), kaya pa. Ang mahirap lang kausapin are those who own the music, for example the band.

Hopefully now that El Bimbo was streamed, it’ll be easier. Pero ang problem lang is because of the things that are happening online… parang takot narin yung mga tao to air.

Luis Marcelo: I think we should stream. Think of all the people who have never experienced theater or who might not be so privileged. Let’s face it, kahit dito, mahal parin yung mga tickets. The broadway shows that we do, syempre mahal yun. But even if you talk about… let’s say [PETA’s] “Rak of Aegis” – even if tickets aren’t as expensive, it’s still a price for those who might not have access to it. Isipin mo yung mga CCP shows sa [Tanghalang Pilipino]. Let’s say they are cheaper but just the transpo to get there! And then pag pumunta ka pa dun, you’re going to spend on food and all that. That’s what makes theater an experience. A good experience, but also an expensive experience.

In order for you to reach out to people, especially those in the provinces – people in all different parts of the Philippines – [those who] don’t get a chance to see these theater shows, [streaming is] a good chance for them to see them, especially if they can’t fly here.

Luis: I agree! When you see it, it’s like, “Oh, I want to see theater.” And more importantly, I want to do theater. I want to be part of theater. And you’re inspiring all those kids there. That’s the opportunity that you get when you stream!

Lara: Do you think this is the future of theater? Or this is just a band aid solution now na we can’t all go out? Or is this something we can expect more of in the future?

Maronne: I actually think it’s an alternative form of theater. It’s not a band-aid. It’s not the future. It’s another path.

Bibo: And imagine niyo nalang na [you prepared] for a full scale production tapos para lang to record. It doesn’t feel [the same].

Maronne: Some performances are really constructed to involve the audience physically. Like “The Band’s Visit” for example, if you’re going to stream the musical it’s just like the movie. You can’t get the same energy from the live show as you can [from] the movie – it depends talaga sa context.

Lara: What about your thoughts on adapting theater to use technology: like Zoom, and other platforms, for example? I think you touched on this a little bit, Bibo: when you exit, you just turn off your camera… Doable ba siya?

Abi: I was invited by Sixteen Bars for “A Killer Party,” right? So, doing shows online? It’s possible. You know what? Anything is possible. But is it the same? Yun lang. We get to share a form of art. But it’s not the full experience.

An all-new musical shot entirely from the comforts of the actors’ homes. A Killer Party

Luis: For me, it’s not live eh. It’s not the same. Anything pre-recorded doesn’t feel very theatrical to me. It’s an alternative for now. Because, we’ll take what we can get. This is how we can do it, so let’s do it this way. It doesn’t feel the same. There’s no energy that you get from being live with an audience. Being physical with somebody right in front of you. And getting to share that experience with somebody – it’s not the same. I wouldn’t want this to be how it will be. It’s okay for now. It’s an alternative for now.

Bibo: That’s the thing eh. It varies what the scope of what your “for now” is.

Luis: Ako, personally – yung mga productions… I wanted to watch the Virgin Labfest… and I was thinking about it, and I couldn’t get myself to just sit down… cause it’s not the same for me. It’s like doing cinema, because it’s recorded. That’s what it is. But it’s not [live and in front of you]… it’s over the screen. But we have to adapt to the situation.

Maronne: Siguro the only way talagang mag-wowork as a platform itong online is if deliberately the setting is online. Kasi ang weird kung you’re pretending to be there in person, or you’re pretending that it’s a real scene but it’s like green-screen. Like Bibo’s serye, [Love Me Hater], that’s why it works! Kasi the format is online. The format calls for it. Lara: So you really would have to write it and the world building would just have to be, “we’re in a pandemic.”

Bibo: You can do so many experimental pieces on that. With that conceit. On how the world is dealing with [the Corona] virus physically and systemically – I can only imagine all these movement pieces of people not touching.

Luis: I just saw this article in the New York Times, there was a review. There was this theater company in the States that actually did a show – they did Godspell. May picture nung ginawa nila sa theater: six feet [apart] each audience member.

When it’s time for a person to sing, they go behind this glass window and then they sing out. And when they’re not, they’re in masks and on stage. They got a good review from the New York Times, but maybe because they were able to make it work somehow.

Lara: How do you think theater and art – whether it’s dance, music, film, theater; how can it stay relevant in the time of a pandemic where people have decided that this is “non-essential?”

Abi: The thing that I’m actually studying now is music therapy. We can use art as therapy for us. It’s one of the ways to cope mentally – to release and all that. And I think that’s how art can stay relevant. I know it’s still pretty niche because not everyone can do it. Pero alam mo yung kahit kumanta ka lang sa banyo nakakagaan na siya.

Therapeutic na siya eh, so one way or another… because it’s relevant, it will stay relevant. I don’t think it will ever lose its power. Hindi mawawala. One way or another we have it. We write, we listen. Unless you’re in a box and you’re like not doing anything – dun ka walang art. Whatever happens we have that sharing, that form. It will always be relevant.

Bibo: A building is visual art.

Maronne: I was going to say a while ago that I don’t like the concept of this new normal. Because this new normal operates under the condition that the virus is uncontainable. I think this new normal should be that we contain this freaking virus first, implement all the safety procedures, get it under control, and then that’s our new normal.

Answer this survey from PhilStage to help keep theater alive.